I'm feeling a bit worn out from the battle.  I've been on my knees for a friend's marriage, and my fight has been seemingly futile.  Because God is good.  And He lets people make their own choices.  Because God has a plan and didn't ask me for advice on how to carry it out.  And yet, I am weary from the battle.

Trouble is, the fight to keep any marriage together is ongoing.  It requires vigilance.  All around me, and you too, there is a rash of marriages that are losing the battle.  And, quite frankly, it stinks something horrid.  At the risk of getting all James Dobson-y on you, I believe that Satan is having a hayday trying to destroy what God created to bring Himself glory.  Marriage.  And the only real way to suit up for the battle is to chase hard after Jesus.  True vigilance.

That's why I'm drawing a line in the sand today.  Right now.  Because I know that without vigilance, life and kids and busy schedules and remodeling projects and careers will take over, and I will one day find myself and my marriage to be less than what I signed up for that day when I said "I do."  And.I.do.not.want.that!!! 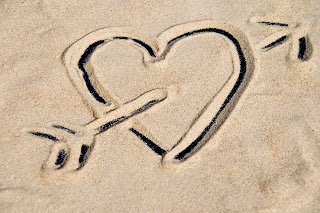 http://www.dreamstime.com/heart-depicted-in-sand-imagefree269702
So here's where the line gets drawn.  Today.

I will not let today go by without doing one thing to serve my husband.  To demonstrate my vigilant commitment to him as his wife.  And each today I will do the same.

Wanna' join me?  I'm gonna' call it the "Vigilant Wives Club".  Anyone can join.  Let's be vigilant about our marriages.  So that God's purpose can be served.  So that our kids can see a picture of God's forgiving, merciful, unconditionally loving character as they watch us, their parents, be married.

If you want to join in, please drop me a line in the comments here.  And let me know so I can pray for you.  Then come back here every Monday, starting tomorrow, and link up to share some creative way that you either plan to be vigilant or were vigilant in your role as a wife this week.  I think it could be a really great way to encourage each other as wives.  And I truly believe it will do some serious enemy tail-kicking.

I'm joining up! Hoping my kids sleep a little longer so I can write!

Alrighty! Thanks so much for doing this! It's really encouraging! Here's my link:

Wow, thank you - what a blessing to see the honesty of Marriage being a choice every day, only with god at our sides can we even attempt to do it well. I found your site through another one and have saved it to my favorites. I have learned in the past 8 of our 15 year marriage that my man deserves the best of my intentions every day. Thanks for the reminder.

My husband and I have been happily married for 20 years this month. That said, I know that I am not as conscious about showing my appreciation for him and my dedication to our marriage. Especially as our kids grow older and ready to leave the nest, we need to really focus on "us," before we wake up one morning with nothing to say. Thanks for this idea; I really like it and plan to participate.

Putting the FUN in DysFUNctional said...

Hopped over from Mrs4444's blog. Sounds like a great idea to remind ourselves why we fell in love with our husbands and to keep those flames going!

Saw this on Mrs.4444 page and im in! This is super crazy my husband and I are going through a rough spot right now!

What a nice idea! Count me in. I'll mention it in my Friday "Things I Learned This Week" post at www.zemeks.blogspot.com.

I saw your link on Mrs.4444's blog, and I love the idea. Fortuitous timing, too, since my young niece just got married this week. I posted a note on my blog giving her advice on things she could do to keep her marriage strong, and as you might imagine, reminded myself of things I could be doing for my husband in the process. My blog is at http://msprimadonna67.blogspot.com

i think this is an awesome idea!! many marriages need this..my marriage is not in trouble but you are right..every marriage needs prayer because the devil is having a hay day with the divorce rate!!
my blog is www.nikkibrewer24.wordpress.com

I'm in and boy do I need this!!! My time is consumed by our 6 mo old and 2 yr old and the endless projects that come with a "new" house...our marriage has hit the back-burner quickly. I want to keep my priorities straight instead of getting caught up in the day-to-day logistics of running a house and really show my husband how much I love being his wife!

Mrs4444 sent me here from her Saturday Sampling linky meme blog hoppy thing. (I'm new at all this blog stuff!)

But I am not new about being vigilantly intentional about marriage. I am a huge believer in the admonition of Paul for wives found in Ephesians 5:33b. (I'm a wife - he's talking to me.)

I promote the practice of wives encouraging, appreciating and respecting their husbands.