When I was a sophomore in high school, I got to go to this career day thing for girls only. My mom was a chaperon. In all honesty, I don't remember anything of what I learned there. All I remember is one detail of one thing that was said. It was when one of the women who spoke told us about the first marathon she ran. I think she was over 40 when she did it. That fact alone really impressed me. Sadly, I remember nothing else of the talk she gave. No details of how she got there. No stories of triumph other than the mere fact that she showed up and finished (which is itself a true story of triumph). I only remember that she ran a marathon as, what was in my mind, an old lady. And I decided then that I wanted to one day do the same.

Having never been a runner (or exerciser, really), I had no plan or goal. Other than to one day do it. To run in a marathon. Still haven't done it.

But last summer, my new friend Diane invited me to join a team that raises money for orphans in Southeast Asia by participating in marathons. So I joined up (after learning that I could walk in the half-marathon), with much trepidation and alarm. But it was a cause that had captured my heart . . . helping rescue children from lives of sex-slavery and homelessness. (Those words just don't settle in my stomach even as I type them here.)

And I had completely forgotten about the "old" lady who "inspired" me to run a marathon twenty some years earlier.

But, you know what? I don't think God had forgotten.

So I trained. Yes, you do have to train even if you're just walking it. Especially if you're now an "old" lady. (In case you're wondering, I am younger than forty, but having recently found some gray hairs, I'm realizing that my definition of old has become drastically different than what it was in high school!)

And the the real triumph was not that I showed up for the race, or even that I finished. Nope. I am getting to see just a taste of the real triumph this week as I read through the blog of the short-term missions team from my church who's over in Cambodia and Thailand right now. And I am finding my heart more drawn to the faces of those children than perhaps to any other ministry I have ever supported.

Yesterday, I was trying to figure out how this area of the world and these children have captured my heart in such a real way. I've never really wanted to travel to Asia. Africa -- absolutely. Eastern Europe -- sure. But not really Asia.

But you know what? Jesus explained it about 2,000 years ago when He was teaching a crowd of people from up on a mountainside. He said, "where your treasure is, there your heart will be also." (Matthew 6:21) And, more than money, I was able to invest so much of my treasure into these children. I invested the treasure of my time, training all those hours. And the treasure of my family, who helped me train and encouraged me along the way (literally -- along the route of the marathon). 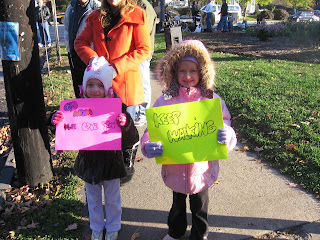 Turns out, Jesus got it right.

So as I begin training to walk/run (walk two minutes then run 1 minute) for the Cleveland 1/2 marathon in May, I'm more excited than trepidatious. To see even more of the triumph that God is letting me be a part of. More kids rescued from the disgusting evil that lurks in their world. And I am so thankful! Truly. Thankful. That I get to be a part of it. And that I get to love these kids even a little bit like Jesus does.

And maybe by the time I'm forty I'll be ready to actually run a marathon.

p.s. Check out Tuesdays Unwrapped for some amazing stories of enjoying the treasures that are everyday.
Posted by brianna at 8:22 AM

Maybe we should coordinate our full-marathon plans! I hope to complete on sometime in the next 3 years!!!
You motivation for run/walking is so much more eternal than mine. What an amazing opportunity you have! I love it!

Do it! You can absolutely do it! As one non-athlete to another, I promise you that you will reach your marathon goal if you keep those beautiful faces at the forefront of your thoughts. I ran my first marathon in November, and it was one of the greatest experiences of my life. If you need any encouragement check out my running posts. They will definitely make you feel better about yourself:)

I think people that run marathons are amazing...and running for such a great cause is awesome too!

I have never had the desire to run a marathon until I watched The Passion (Mel Gibson's) again last year... It occured to me that this life of carrying our cross is HARDER than a marathon. Suddenly, it became apparent that training for a marathon would have countless spiritual applications (discipline, perseverance, etc) as well! Anyway, blessings to you as you do this thing that in Heaven will seem like CAKE compared to the rest of your "real" life!

May you run the race set before you by taking Paul's advice: "let us throw off everything that hinders and the sin that so easily entangles, and let us run with perseverance the race marked out for us. Let us fix our eyes on Jesus, the author and perfecter of our faith, who for the joy set before him endured the cross, scorning its shame, and sat down at the right hand of the throne of God. Consider him who endured such opposition from sinful men, so that you will not grow weary and lose heart."