So last night we took the girls to their first ever Cleveland Indians baseball game at Progressive Field. And what an appropriate name for the field it turned out to be.

This was my husband's and my first trip to Progressive Field. It used to be called "Jacob's Field" or, even better, "The Jake". We made many memories at the Jake (now called Progressive Field), so you can imagine our sense of dismay (ok not really DISMAY, but you know what I mean) when they changed the name. We spent many a date at The Jake before we were married. We got to see the American League Championship Series against the Seattle Mariners there in '95, in the frigid October air. We got to sit in a loge (spelling?) once with my sister-in-law and brother-in-law. We even got to see the home opener of 1996 at the Jake, when they received their World Series rings (even thought they didn't win, they got something for just being in it the year before). We went there on a whim on our 1st wedding anniversary as we were driving by after having a nice brunch aboard the Good Time Two. We were listening to Tom Hamilton on WTAM 1100 when someone hit a homerun, the crowd went wild, we heard it and decided we wanted to be there too. So we parked the car, found a scalper and the rest is history. :)
So when The Jake changed its name, we struggled a bit. What would we call it now "The Prog"? (That was actually my husband's idea.) But last night, it proved an appropriate name for this new stage of life we've recently hit. Namely, the stage where we can go to a large public gathering, such as a professional baseball game, with our children and actually find more enjoyment in the process than stress. (Notice I did not say it was entirely stress-free.) 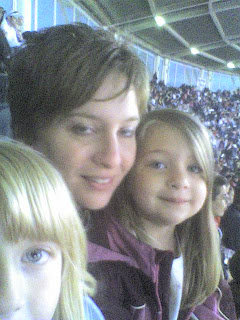 So we are progressing. And we had so much fun (despite what I may look like in the above picture taken with the cell phone)!
And Cleveland even won!
GO TRIBE!
Posted by brianna at 3:17 PM

Email ThisBlogThis!Share to TwitterShare to FacebookShare to Pinterest
Labels: growing up, mommyness