"Is it long enough yet, Mommy?"
I measure her hair, and I think it is. So I make the appointment and we go.
When the hairstylist looks at me from behind the hair, where she's measuring again for accuracy, she shoots me a look of warning. Wanting to preserve as much of my beautiful daughter's lovely long hair as I can, I jump out of my seat and choke out a long diatribe of how I measured at home and it came down to here. And how fifteen months ago, when my oldest daughter did it, they put it all into one braid in the back and it turned out so cute. So why did she have to put it into six different ponytails and measure each one ten inches. That wouldn't leave much hair! She trains me in the process and says they'll throw it away if it's not long enough.
I want to ask her to just pretend for my daughter's sake. Only it's really for my own.

But instead I ask my six-year-old. "It's going to be shorter than we thought it would be. Do you want to keep growing it and come back another time? Or just get it cut and not give it to Wigs for Kids?" She does not hesitate. She immediately says, "No. I want to give it to them."


So Linda Sue gets out the little rubber bands and puts six little ponytails all over her head. Then, with razor-sharp clippers, she cuts each one. My heartstrings feel damaged as well. Tears welling as I look away, I get a grip. Then I look at my daughter. She is beaming radiant.
And she looks just like Jesus. 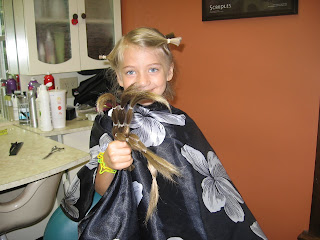 Because that's Who He is. The Jesus Who gives to those who don't have from the deep wells of what He has. The One Who gave it all when He gave up His perfect beauty and took instead my ugly nasty sin. Rising even more beautiful.
So I leave humbled by my six-year-old. Who exposes true beauty.
Posted by brianna at 11:57 AM

Email ThisBlogThis!Share to TwitterShare to FacebookShare to Pinterest
Labels: mommyness

Very sweet. My daughter did this when she was in 5th grade, and I'm growing mine out now. =)

You daughter looks beautiful and so sweet holding her hair. What an unselfish thing for her to do. You are clearing doing something right. =0)

This is so sweet. To echo what Kelly said, you must be doing something right to raise a daughter who is so willing to give - without a thought as to what it would cost her in terms of her hair. She looks beautiful.

That's so funny that she had it done the same day Sierra had hers done. You're right, it's so sweet and adorable and they both look so stinkin cute :-)